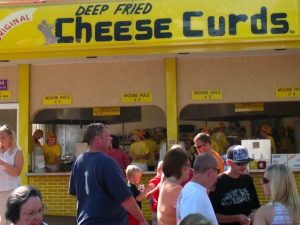 If you’ve ever attended the Minnesota State Fair, then chances are you’ve visited The Original Deep Fried Cheese Curds booth. Owner, Dick Mueller, and his family were the first to introduce deep fried cheese curds to the event back in 1975. For 39 out of their 42 years at the fair, they proudly served their loyal customers cheese curds from our very own Ellsworth Cooperative Creamery. Our creamery only began making cheese curds in 1968; you could say Ellsworth Cheese Curds were still in their infancy back then. So working with the Muellers and having Ellsworth curds at the Minnesota Fair was a pretty big deal!

This spring cheese curd fans from all over the region shed a tear when they heard the news. Dick planned to retire and it was hoped that he could pass the business on to his son, Tom, who would continue the tradition at the fair. But it was not to be. After a diligent “Save the Curds” campaign and meetings with fair officials, it was announced this week that The Original Deep Fried Cheese Curd space would be offered to another fair vendor.

It’s the end of a cheese curd era at the Great Minnesota Get Together. But we couldn’t let the story end this way so we joined with the Ellsworth Cooperative Creamery to invite Dick and the family to the Cheese Curd Festival to acknowledge them for their hard work and advocacy on behalf of our lowly cheese curds.

At 7pm this Friday evening, June 23, we’ll have a short presentation for Dick and the family at the Cheese Curd Festival grounds. If you know Dick, then you know he’ll be happy to say a few words, too! Rumor has it he has a special presentation of his own for Joe Hines, his contact these many years at Ellsworth Cooperative Creamery. Then Dick and the boys will be frying up cheese curds for us as only they can!

This is a great time to come by and thank the Mueller’s for 42 years of cheese curd goodness and shake hands with a cheese curd legend. We hope you’ll join us as the Muellers share their State Fair memories over a boat of curds and a cold beverage.

Serving Music as Our Side Dish
Scroll to top